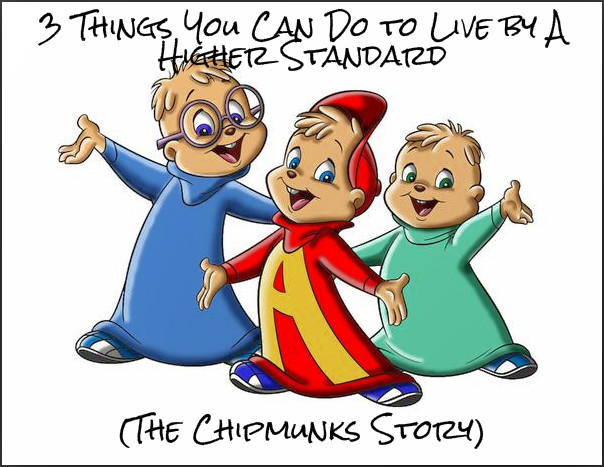 You Can Set A Higher Standard

Sitting at the kitchen table today I watched as chipmunks scurried around the backyard on their daily routine. As I have been doing for the last few weeks, I stepped out onto the back porch and put some nuts for them to eat. Initially I did this with some pistachios thinking that chipmunks have a higher standard than squirrels.

But, today I put out some walnuts. LOL. And, the day before yesterday it was peanut butter sandwich crackers (the sweet kind)… so much for higher standards!

It seems that the chipmunks have a routine they follow that begins about 10 am. So, I was sitting at the kitchen table this morning eating a bowl of cereal and patiently waiting for Alvin and his brothers to arrive. It was a good morning… I have become attached to watching the animals work in the backyard. The robins hunting for insects and worms. The smaller birds playing at my neighbors bird-feeder. The squirrels foraging. And, of course, the tiny chipmunk scurrying to and fro. They never seem to slow down. One speed: git ‘r dun!

I love how animals hold themselves to a higher standard. All day they’re looking for nuggets. Scratching for tasty morsels. Hunting for crumbs. They put in work because they’re hungry now. Here’s the thing…

They get enough to feed them today and enough to stash away for a rainy day. They keep on stashing so they have enough left over for the winter because they live by a higher standard. YESSIR!!

In my watching, I have noticed some things that I want to share with you today. Before getting into my other points, I should probably point out the fact that these are some of the smallest animals in the yard but they get it done. All day they are foraging and picking up nuggets. It reminded me of myself lately. All day I’m reading and studying. Writing and working. Picking up nuggets of wisdom that I can make use of in my life.

I’m filling my head with nuggets. Why can’t you do the same?

Keep coming back I’ll keep bring what I find home to the nest.

2. BRING THE BOUNTY BACK TO THE NEST

Another thing that I noticed is that unlike most of the other animals, the chipmunk seems to bring home most of what it finds. I’m not confident that they don’t eat some of it but they do keep the good stuff in their cheeks. I have learned that going around and trying to tell everyone the good news that swells in my heart isn’t always the right thing to do. Most people don’t hold themselves to any standards… let alone a higher standard. But, I do! And, so do you or you would have stopped reading by now.

That doesn’t mean you have it all. You may not have the fancy cars or the big homes or the schnazzy corporate title (and I’m not against having any of that). You hold yourself to a higher standard because you have a dream and a vision. You are ready to quit playing around with people who have little to no standards and make some serious things happen for yourself with the grace of a Power greater than yourself.

Yeah, I’m talking about you, family!

It’s not that I don’t want to say something when I hear someone complaining about their boss always ragging on them for this, that or the other. And, it’s not that I don’t have a comment when someone tells me over the phone that their boyfriend once again did some crazy mess that they have done  time and time again before.

My thing is that I know that my words won’t be heard because most people simply want to whine and moan but not put in work. So, I bring it in to the nest and let you reap the lessons of my findings. Maybe you don’t need the stories yourself — at this moment — but you can definitely store them up for the winter.

For when you feel the world is cold and lonely (and we all feel that way sometimes) you have some nuggets of wisdom that I brought home for you to store up. In those moments, pull up these posts and nibble on some good food for thought.

I brought them home especially for those that would appreciate it, family. Because you hold yourself to a higher standard.

Keep some of the good advice — that YOU find — in your cheeks and bring it home to the people who will benefit the most from it.

3. BE LEARY OF SUSPICIOUS ACTIVITY

Sometimes  I get up from the table, open the back door and watch the little furry angels scampering across the yard. As soon as they hear the door opening they freeze. They focus their attention. And, run in opposite direction at the slightest hint of danger.

That  amazes me because I would think that they would take off as soon as they heard the door but they don’t. They stand up on the back feet and stare me down. If I make a sudden move they’re gone.

It’s a habit for them to take defensive action when their work is threatened. But, the habit is to assess the threat before taking action.

Did you get that?

I said they make it a habit to stop, look at the situation, and listen to what’s going on BEFORE taking action.

Too often in my past I would lash out at people for even a perceived threat — not to mention an actual threat. Most of the time, I was wrong in my actions but I didn’t want to face the facts. I didn’t want to listen. Because, I thought I knew it all. I wasn’t trying to live by a higher standard and, therefore, I was constantly on the defensive side (because of a lack of faith, a lack of belief in myself, a lack in my thinking).

We don’t know it all, family. Take the time to stop, look and listen to what’s going in your life before you fall into your defensive habits of giving up, of going for a drink, of smoking a blunt, of starting an argument with your loved one, of walking out in the middle of an agreement. I’ve done all of them and more. But, the overriding fact is that I was giving up on myself and giving in to whatever sin or vengeful act that I was accustomed to doing.

Instead of taking the time to make a significant change in my attitude and thought process… a change in the positive direction. Instead of holding myself to a higher standard… a standard that was drilled into me as a child. I resorted to the insanity of bad decisions. But, that’s just my story. I made a change. You can, too.

You can’t cross burned bridges but you can forge new paths in your new life. That’s your focus, family… building a new life where you are committed to fortune and dedicated to service. If you have made it a natural part of your routine to gather nuggets of wisdom, keep the good stuff in your mouth and bring them home to the nest, you will find it easier and easier to make smarter decisions when faced with a threat to your peace, joy, and happiness. That, family, is part of how I live by a higher standard. Take the time to assess your threat — perceived or otherwise — and take the best course of action doing the next right thing. It will help you to live by a higher standard.

PS. I had to make one more statement here about one of my favorite cartoons. I mean, I couldn’t talk about chipmunks without revisiting Alvin, right?

Did you ever notice how Alvin and his brothers worked hard every day making music, listened to their father advice, and always worked as a team. That’s the type of community that we promote hear. Don’t worry I’m not calling my self the father of advice. I’m suggesting that there is a power greater than us that moves mountiains for us to prosper in ALL that we do. And, I for one have had some mountains moved. I’d like to tell you about them and how you can have yours moved, too. No religious talk… just work!!

PSS. Subscribe to this site and stay plugged in. It’ll only cost you your name and email address so do that NOW!

Writing Your Stories is Easier With a Template 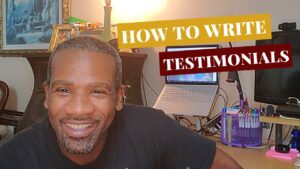 How to use testimonials in marketing

https://youtu.be/IHv2MgJYFU0 Do you know how to use testimonials in an automated email sequence? In this video, I’ll give you the seven questions to ask your

How to Be Influential in Your Writing

Session 6: You’re Not Using Persuasive Writing A major mistake first-time authors make is to just start writing the stories they want to write. While

Are you ready to get convert more leads into sales?

Let's talk about How to make that happen